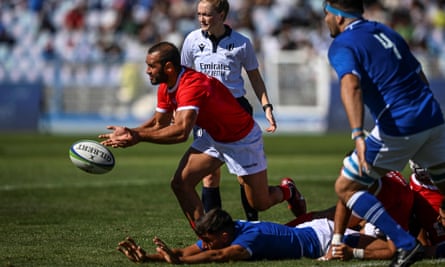 BRyce Campbell doesn’t want to dwell on the loss to Chile that sent the US Eagles into the Rugby World Cup finals qualifying tournament, which begins in Dubai on Sunday. Of course, the Indianapolis-born center prefers to focus on Kenya, Hong Kong and Portugal, who must beat the USA if they are to go on a World Cup run for the first time since 1995.

No American really wants to think too much about the loss to Chile in July except as a really hard lesson.

“The wheels fell off,” says Campbell, from the Emirates, fresh from a meeting with the Eagles coaches. “After the yellow card 10 minutes before half-time, we couldn’t regain the momentum.”

The Eagles won the first leg against Los Cóndores by a point over a Santiago swamp. In the second leg, under the scorching Colorado sun, they scored three early tries and seemed set up fairly for France. Then came a yellow card, Nick Civetta on a ruck, and a save of mistakes that were ruthlessly exploited by Chile.

“We were just scattered,” says Campbell. “I don’t know if that had to do with our preparation or it was just one of those days. But now the past is past and we have to win three games here in Dubai. That’s what counts.”

Civetta, once from Newcastle, is a heavyweight now absent through injury. Joe Taufete’e, the hooker from Leicester, is another. But Campbell played for London Irish for two years and there is more European experience in the squad. Among others, fly-half AJ MacGinty plays for Bristol, hooker Kapeli Pifeleti and scrum-half Ruben de Haas for Saracens, and giant center Paul Lasike was once a Harlequins and before that the Chicago Bears. But the squad still consists of eight uncapped players.

“They’re doing great,” says Campbell. “So we had games” – educational defeats – “against the cougars and cheetahs in South Africa and a scramble with Western Province. We spent some time together at camp and then got to play properly and those opportunities showed that these guys are ready. When they put the jersey on, people will see that they are real.”

From DC front row Jack Iscaro to New England back three Mitch Wilson, head coach Gary Gold has handpicked a team to go first against Kenya that is fully representative of major league rugby. And yet, in the American game, there’s always another sockful of billiard balls to dodge – or flush in the face. MLR is heading into its sixth season, but last month, after a long standoff with the Australian owner of Los Angeles and Austin, the league announced the two teams would not compete next year.

The league has announced a dispersal draft and a new team in Chicago. But the players association has protested against the process and Campbell, who played for Austin, isn’t the only Eagle wondering where he’ll call home next.

“People are definitely talking about it,” he says, before insisting the MLR situation is “irrelevant at the moment.” We have a job to do in Dubai. We’ll take care of that and the rest of the boys will be taken care of. So is it easy? no But at least we have something to focus on.”

World Rugby focuses on the USA, which will host the men’s World Cup in 2031 and the women’s in 2033. After the game in Chile, the chairman of the governing body paid tribute to the winners, who were then considered the Eagles.

“I don’t think the game needs the USA in France next year,” said Alan Gilpin. “[But] I think the US plan will benefit significantly from the US being in France.”

Like everywhere else in the Oval world, American rugby is a very political place. But after the Eagles women reached the last eight in New Zealand last month, there is a belief in the men got to now qualify for France.

They should do it through rankings alone. The Americans are 19th, Kenya 33rd, Hong Kong 22nd, Portugal 20th.

In addition, Gold has acquired some heavyweight assistants. Mario Ledesma, a gorgeous Argentine hooker who oversaw the Pumas’ first win over the All Blacks, is in Dubai with the Eagles. For example, John Plumtree, a former All Blacks coach, and Steve Brett, once a Crusaders flyer-half in New Zealand, are now coaches of the MLR team in Atlanta.

“We definitely have all the parts,” says Campbell. “We’re really lucky to have a group of coaches who are so experienced and now it’s up to us to perform.”

Portugal also has an experienced coach, Patrice Lagisquet, formerly of Biarritz and France, known as the Bayonne Express in his international days. They also have the Rugby Europe Super Cup, where Lusitanos XV playing against sides from Georgia, Spain, Israel, the Netherlands, Belgium and Romania is essentially the national team in disguise. This year Os Lobos – the wolves – have asked questions to Argentina, Italy and Georgia.

Not to sack Kenya and Hong Kong but USA vs Portugal on November 18 seems to decide that precious place in France, in Pool C with Georgia, Wales, Fiji and Australia.

Campbell is still not drawn.

“We’ve been focusing on ourselves for the last six weeks: 80-90% of the game is going to come down to that. We have shifted our focus to Kenya but we will take it one week at a time. We’ll tweak a few things here and there based on the opposition.”

Fair enough. Campbell agrees that the next three weeks are incomparably important for American rugby.

“It’s about the entire trajectory of our game. This sport in the States. A lot depends on it. We take that responsibility to take care of the business.”