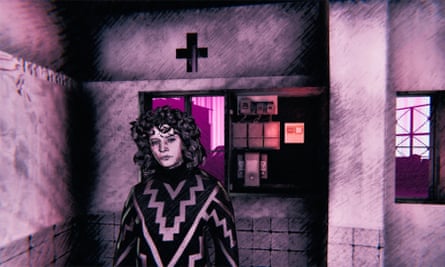 HAlloween may be over, but the spooky memories will last a lifetime, at least for me. I don’t like horror. I’m one of the world’s biggest wimps, and feeding my imagination nightmare fuel will keep me up at night for weeks. Recently, a simple bus commercial for the movie Smile bothered me enough to read the Wikipedia synopsis of the plot, and that alone was enough to screw up my sleep. My partner, on the other hand, can’t get enough of disgusting movies and scary games, so he’s looking forward to experiencing something of a golden age of video game horror. Not only do haunting classics like Silent Hill and Resident Evil receive endless remakes, there’s an ever-evolving wave of indie horror games that are doing ever more creative things with this medium’s ability to invade your mind.

These days I actively try to avoid horrible things, but the games that freaked me out were some of my most vivid childhood memories. Zelda: Ocarina of Time had the Gibdos, desiccated corpses that lived in cemeteries and dungeons. You could stop Link with a yelp, then approach him with terrible slowness, then accelerate at the last second, jump onto his shoulders and try to choke him. And at the bottom of a well was an amorphous, eyeless, white monster, its many hands sticking out of the earth, ready to grab and ensnare it. I had to play the entire Shadow Temple, with its bloodstains and discordant choral music, with my eyes half closed and a guide in hand.

In the game’s fiction, I later learned that this temple was the place where the servants of the Hyrule royal family imprisoned and interrogated the enemies of the realm. It had become an unspoken mark in the history of the kingdom – hence all the undead creatures and abandoned torture devices. Everything a little dark for a piece of cake, right? Then there was the cursed Skulltula family, humans shockingly fused with giant bone spiders that hung from the eaves of their former home, begging you to save them.

The polygons and fuzzy visual textures of the era only added to the creepiness; The technical limitations were one of the reasons why these games were so uniquely disturbing. Silent Hill was shrouded in fog due to the PlayStation 2’s poor visibility, but the game’s designers made it part of their fiction.

The creators of Ocarina of Time have embarked on that as well, especially with the sequel Majora’s Mask, which remains the most uniquely immersive game I’ve ever played. The scenes of transformation – Link screams, consumed by the souls inhabiting the masks he collected – stay with me to this day. That hideous, grimacing moon. Termina, the shadow world that holds him captive, is edgy and oversaturated, alien and uncomfortable. Majora’s Mask had such a lasting impact on the millennials who played it as children that it spawned a microgenre of spooky folk tales and theories. Is the whole game a hallucination in the mind of a dying link? Is he already dead, and this is purgatory?

It also inspired a gripping ghost story that made its way around the internet in 2010: Ben Drowned. It is a foundational text of the creepypasta genre – online horror told through the language of the internet, YouTube and forums and now social media. The story, shared on the now-disgraced 4chan messageboard, began with a second-hand copy of Majora’s Mask with a haunted save on it. In a video posted to YouTube, Majora’s Mask becomes even more disturbing with reverse music and sudden combustion. I won’t spoil it further, but it was the beginning of one of the internet’s best ghost stories of all time, kicking off a story arc that lasted a decade.

It’s no surprise that the game inspired such a chilling story. I knew it wasn’t real, but that story about the haunted shell lived in my head for years. Modern spooky urban legends today often begin in virtual spaces before spreading into real life — check out Slender Man, a character created on forums who became a collaborative, unsettling legend and the subject of a moral panic in the real world when the mythology was implicated in a 2014 stabbing.

The things that scared all of us as children tend to take pride of place in our imaginations. Five Nights at Freddy’s, the terrifying horror game that became a playground sensation in the 2010s, may well prove to be this generation’s Ghostwatch. Games are already inspiring their own folklore, and we’re sure to see a lot more horror generated from them in the years to come.

If you really like scary games and aren’t just Halloween crazy, check out horror fan Keith Stuart’s small list of new horror games – from Victorian English point-and-click folk horror to disgusting Giger-esque science -Fiction. Here’s a sneak peek: “It’s the late 1980s and you’re a pregnant woman traveling to a small Sardinian village to tell your lover that he’s going to be a father soon. But when you arrive, slip into a bizarre neon horror world full of hidden secrets and dreamlike visions amidst the old, claustrophobic streets. An Argento-style giallo experience crammed with meaningful and folkloric mysteries, Saturnalia (pictured above) is the perfect fall horror.”

Bayonetta 3: the craziest game you will play this year

“I have to turn this scene upside down”: What it’s like to star in a Call of Duty game

What I Learned From My Last Gaming Humiliation – Dominik Diamond

A big question from the reader this week Marie: What is your favorite game mistake of all time? Mine remains “Press X to Shaun” in Heavy Rain where the game makes you scream SHAAAAUN through one of the most important scenes of the game.

Ahh, I kind of miss the era when glitches took on an almost folkloric meaning. I had an error in it once The Elder Scrolls: Oblivion where I was incessantly pursued across the lands by super-powered vampires; It took me hours to get rid of them (by killing them very slowly). Now that developers can fix things with patches, these often hilarious accidents of code and circumstance are rarely immortalized – unless captured in YouTube videos Assassin’s Creed Unity‘s mutilated faces (pictured above).

Being both lucky and unlucky to play games before they’re released, I’m still plagued by glitches that can ruin or unexpectedly liven up my gaming experience. Here’s one: when I was reviewing Watchdogs Legion A few years ago I got to a point in history where you either have to allow a techno-fascist to upload their brains to the cloud and escape death, or shut down their servers. Apparently I shut down his servers. And my Xbox turned itself off. Not only that, my TV went black and all the lights in my living room went out as well. I thought for a moment that this was an awesome fourth wall breaking moment, but it turned out to be an impressively destructive bug that overheated my Xbox and knocked out the electricity in my house. It was still pretty spooky.